Trilostane for Your Furry Friend: Treating Cushing's Disease in Pets

Trilostane for Your Furry Friend: Treating Cushing's Disease in Pets

Like humans, pets can suffer from hormonal changes and disorders as they age. These can cause them to act strangely and change in appearance. One of the most common of these disorders is Cushing's disease. While rare in humans (1-2 cases/million people per year), Cushing's is quite common in pets, particularly in dogs, occurring in 1-2 out of every 1000 dogs per year.

Cushing's most often occurs in middle-aged or older pets. It most commonly occurs in dogs, although cats can be affected by it as well. Some common signs and symptoms include:

If your pet is showing signs and symptoms of Cushing's, your veterinarian can confirm this with laboratory tests. Blood or urine tests can show elevated levels of cortisol to help with an initial diagnosis.

Determining the type of Cushing's disease is important in guiding how your pet will be treated. This can be done with a high-dose dexamethasone suppression (HDSS) test. The body has natural feedback mechanisms where an excess of cortisol will normally suppress the release of ACTH, the hormone that causes cortisol release. This will eventually lead to a decrease in the amount of cortisol in the bloodstream. Dexamethasone is a drug that mimics cortisol; giving large amounts will prevent ACTH production and, therefore, prevent cortisol production. This will eventually lead to a lower level of cortisol in the blood in pituitary-dependent Cushing's. However, tumors on the adrenal gland release cortisol independently of ACTH, so adrenal-dependent Cushing's will not respond to HDSS. 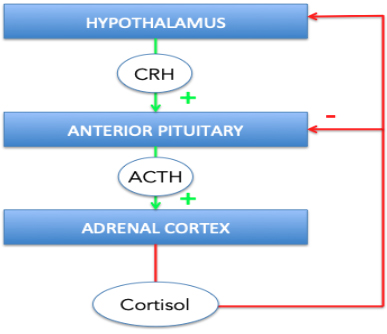 The only way to cure Cushing's is surgical removal of the tumors causing the problem. This treatment option is expensive and not widely available in animals. Because of this, veterinarians will often choose to manage the signs and symptoms of Cushing's medically with drugs such as trilostane

Trilostane is a medication that inhibits the enzyme 3-beta hydroxysteroid dehydrogenase, which is important in the production of hormones in the adrenal gland. This leads to a decrease in the production of cortisol in the body. While this helps to control the signs and symptoms of Cushing's disease, it will not cure the underlying cause.

Trilostane has some mild side effects, including lethargy, lack of appetite, and GI effects such as vomiting and diarrhea. To avoid these or more serious side effects, your veterinarian will need to monitor how your pet responds to this therapy. Every 10-14 days after starting trilostane or starting a new strength of trilostane, you veterinarian may require an ACTH stimulation test to determine if therapy is helping your pet produce cortisol normally and adjust therapy accordingly.

The FDA designates it as pregnancy category X; it should not be given to dogs or cats that are pregnant, nor handled by people who are or plan to become pregnant. Be sure to wash your hands after handling Trilostane.

Trilostane is available commercially as Vetoryl™ as 10 mg, 30 mg, 60 mg, and 120 mg capsules. However, it can be made in other strengths and formulations, such as liquids or chewable tablets, at some compounding pharmacies.