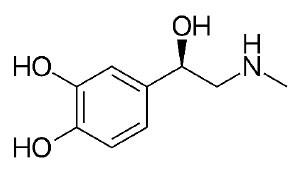 What do you think of when you hear the words “adrenaline rush?” The first things that come to mind are probably “fight or flight”, which is a phrase to describe a situation where, in a moment’s notice, your body can react to a stressor in your environment either by readying for a fight, or readying for a flight. Your body accomplishes this “readiness” by releasing a molecule called adrenaline, shown to the right. 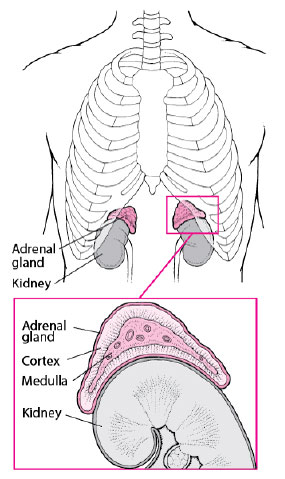 Adrenaline (from ad= near and renes= kidney), also known as epinephrine (from epi=above and nephro= kidney), is normally stored in glands located above the kidney, in structures known as adrenal glands (shown to the left). Notice how close the adrenal glands are to the kidneys. This proximity is evident in the fact that their names are so similar. We will be focusing on two major products of these glands: first adrenaline, then cortisol. The processes in dogs are analogous to the processes in humans, so we can learn a great deal by studying how the system works in humans.

Effects of Adrenaline on the Body 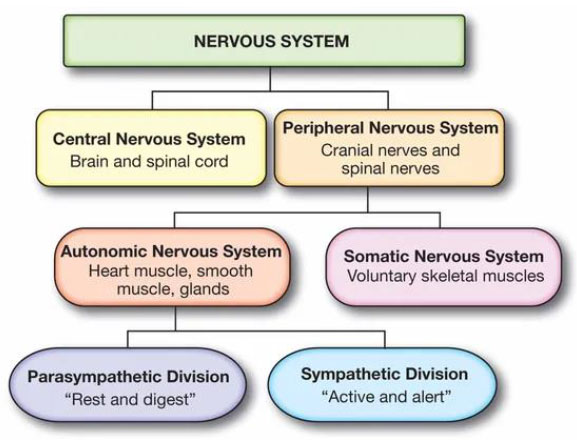 Effects of Cortisol on the Body 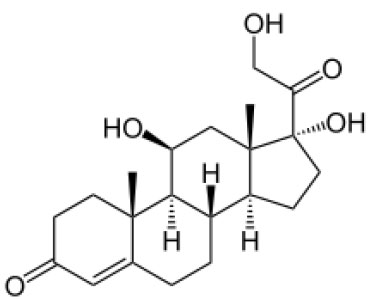 In addition to controlling sympathetic and parasympathetic activity, another important adrenal hormone is cortisol, a steroid hormone whose structure is shown to the right. Note that the term “steroid” denotes a specific ring structure shared by all steroid hormones. The two steroid hormones that are important here can be divided into two classes, glucocorticoids and mineralocorticoids. Note that a steroid molecule can have various degrees of BOTH glucocorticoid AND mineralocorticoid activity, but for simplicity we will consider them as different molecules.

The release of glucocorticoids and mineralocorticoids throughout your body is triggered by the pituitary gland, which is located at the base of your brain. The pituitary gland releases ACTH, which then circulates throughout the bloodstream, reaches the adrenal glands, and acts on the adrenal cortex to stimulate cortisol release. Glucocorticoids, as the name implies, increase your blood glucose levels, but also have very important effects on reducing inflammation. The common topical agent Cortisone is a classic example of a glucocorticoid. Mineralocorticoids are less common but work to increase blood pressure by increasing the salt levels (“minerals”) in your blood, driving water by osmotic effect into your blood vessels and increasing the blood pressure.

When we learn about diseases, it’s helpful to first consider how a body process occurs normally (when there is no error). Then we can start to consider what happens when an error occurs. By this point, we have learned a great deal about the functions of the adrenal gland. Cushing’s disease is a disease of the adrenal gland which results in excessive amounts of cortisol being synthesized and generated throughout the body. In dogs, this excess production of cortisol may be due to an adrenal gland tumor, or due to a pituitary gland tumor. Regardless, this increased cortisol level causes increased thirst, increased urination, an increased appetite, thin/fragile skin, or enlargement of the abdomen. As you can tell, these symptoms are very nonspecific overall. That is why it is important to get your pet checked by a veterinarian for official diagnosis. There are many reasons for each of these symptoms to be occurring, which may or may not lead to being diagnosed with Cushing’s disease.

Trilostane is the only FDA approved medication for treating Cushing’s disease in dogs. It is a steroidogenesis inhibitor, which means it works to block the production of glucocorticoids and mineralocorticoids. This is helpful for patients with Cushing’s disease, who suffer from excess amounts of cortisol being synthesized by the body.

How can CareFirst Specialty Pharmacy help?

The nature of Cushing’s disease is that every dog will require a different level of steroidogenesis inhibition. In addition, a dog will not be maintained on a dose of trilostane forever—the dose will increase or decrease based on the activity of the organs. At CareFirst Specialty Pharmacy, we can compound a formulation of trilostane for your pet with the right strength, right flavor, and right dosage form to meet your pet’s needs. For more real-time dose adjustment, we offer trilostane as a flex-dose tablet, with scoring and grooves on each tablet making it easier to cut your doses in half, into thirds, or even fourths. Do not adjust the dose without speaking to your doctor first.