Alopecia Areata (AA) is one of the most prevalent autoimmune conditions in the US, with a prevalence of about two percent. AA is characterized as an autoimmune attack on the hair follicles, resulting in non-scarring bald patches as these hair follicles are killed. As these bald patches spread they can cover the entire scalp (alopecia totalis) and may even result in total body hair loss (alopecia universalis). Immune cell infiltration found in these lesions helps support the fact that AA is likely caused by immune dysfunction. In addition, the genetic abnormalities found in AA are similar to other autoimmune diseases such as type 1 diabetes and rheumatoid arthritis. Unfortunately, there are no therapies currently that can be used to effectively curb and reverse the hair loss seen in AA.

Tofacitinib is classified as an anti-rheumatic agent that is normally prescribed for autoimmune conditions such as rheumatoid arthritis, ulcerative colitis, and psoriatic arthritis. It functions through inhibition of the JAK-STAT pathway which is made up of several pro-inflammatory paths and results in increased inflammation. There have been four different JAKs discovered at this point (JAK1/2/3 and TYK2) and variations in their function can be associated with increased or decreased total immune system function. Through inhibition of JAK1, JAK2, and JAK3, Tofacitinib reduces inflammation and the overactivity of the immune system seen in AA. Tofacitinib is currently available commercially as 5 mg, 10 mg, and 11 mg tablets under the brand name Xeljanz®.

There have been several case reports involving the use of oral tofacitinib to treat AA in patients with relatively positive results.

In one case, a patient presenting with alopecia universalis and plaque psoriasis was treated successfully and regained complete hair growth. In a retrospective study done performed in 2017 with 65 potential responders to therapy, 77% attained a clinical response (including 58% who saw at least 50% hair regrowth).

What Are The Adverse Effects? 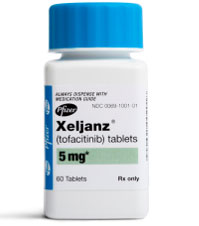 As a drug that lowers the effective function of the immune system to combat autoimmune disorders, there are some concerns with taking tofacitinib oral tablets. Some of the adverse effects seen when taking tofacitinib include increased risk of infections (bacterial, fungal, and viral) as well as malignancies. Hypercholesterolemia (high cholesterol), thrombocytopenia (low platelet count), and neutropenia (low immune cell count), headache, and diarrhea have also been noted. There have also been questions about the effect of tofacitinib on fertility, so it may be best to avoid its use in pregnant patients as of now. However, it is important to note that these adverse effects only apply to the oral tablet form of tofacitinib.

In conclusion: Tofacitinib is a JAK-STAT kinase inhibitor indicated by the FDA for treatment of rheumatoid arthritis, ulcerative colitis, and psoriatic arthritis. However, there have been several studies testing the utility of tofacitinib both orally and topically for alopecia areata as well. Tofacitinib is available commercially as 5 mg, 10 mg, and 11 mg tablets under the brand name Xeljanz®. If used, topical tofacitinib products would need to be compounded into a lotion, cream, or ointment by a compounding pharmacy.